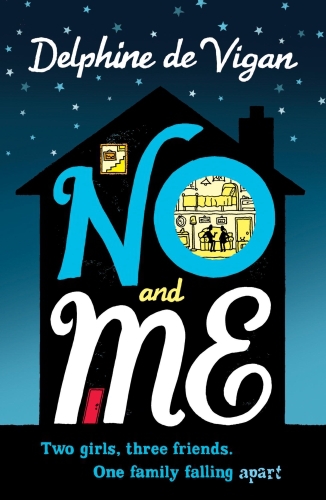 "All my life I've felt on the outside wherever I am, out of the picture, the conversation, at one remove, as though I was the only one able to hear the sounds or words that others can't and deaf to the words that they seem to hear. As if I'm outside the frame, on the other side of a huge, invisible window.
But yesterday when I was there with her, I'm certain that you could have drawn a circle around us, a circle I wasn't excluded from, which enclosed us, and for a few minutes, protected us from the world."
At thirteen-years-old, with an unusually high IQ and a knack for observing things about other people, Lou Bertignac is not only the youngest in her class at school; she is also the most unusual. Painfully shy, she has few friends, save for Lucas, whose company helps her get through each day. At home, Lou's life is also difficult: Her mother hasn't left the house in years and her father spends his days crying in the bathroom. Lou's world is dark and sad... That is, until she meets No.
No is a teenage girl that Lou befriends for the purpose of her school project on homelessness. Despite the different worlds that these two girls come from, a friendship is soon forged between them. Unable to bear the thought of No not having a home or a family to keep her safe, Lou persuades her reluctant parents into letting her new friend stay with the Bertignac family. No's addition to the household forces Lou and her parents to face the sadness that has been enveloping them for so long -- but not without some disruptions along the way.
From the Hardcover edition.